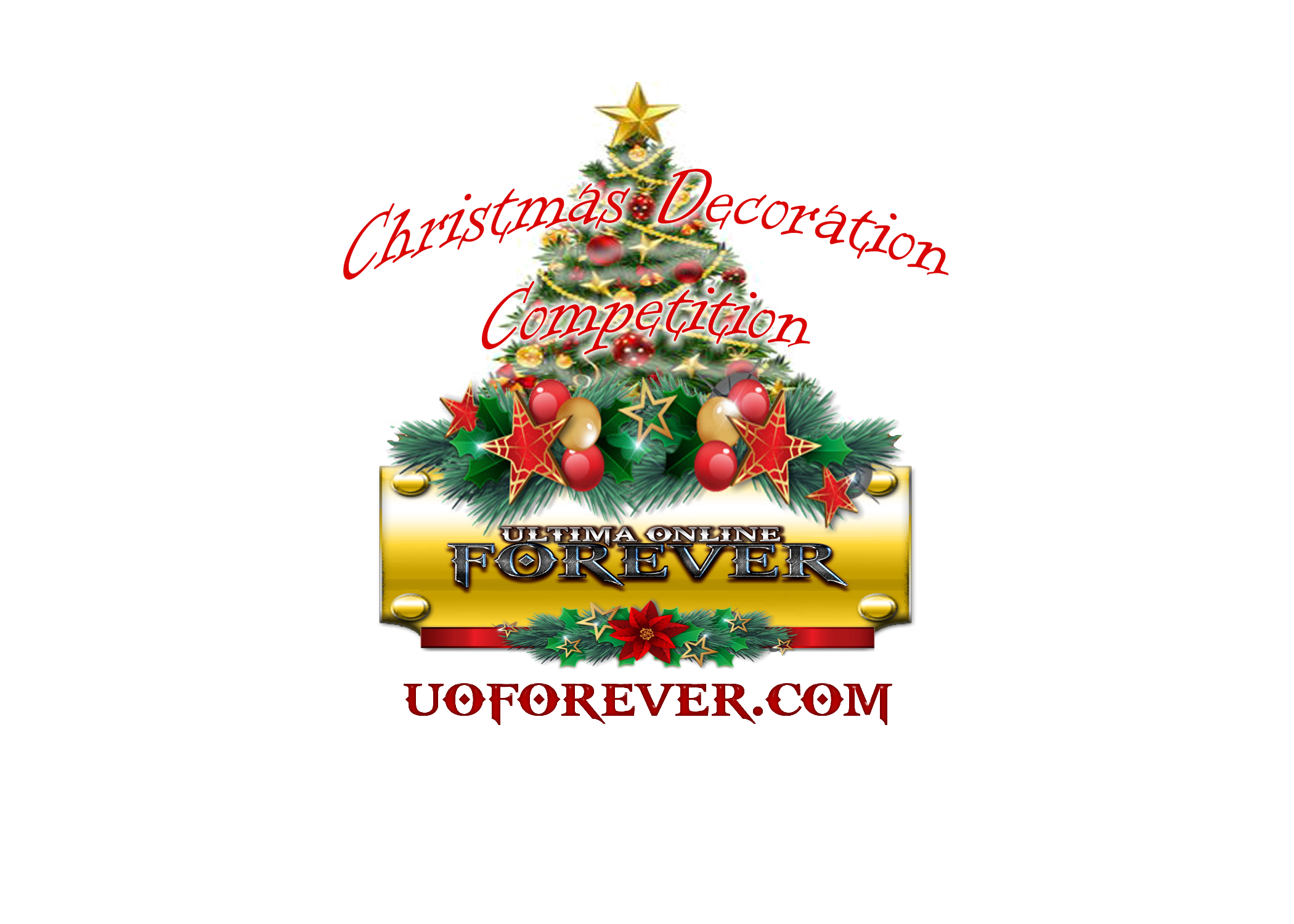 The holiday season is upon us! Show us your best Christmas decorating skills for a chance at some nice prizes!


A Few Tips for Success

Have a theme/story to your entry. Example: Pirate themed, dark and gory, and other themes from pop culture. You can also choose to tell a story with the decor. Whatever tickles your fancy! Just make sure it's holiday related!

Use your space wisely! We judge based off of the ENTIRE house. not just one area. If an area seems to be lacking in sections it may hurt your score. The same is true for over doing it. It will hurt your score if it looks like a box of random holiday deco exploded all over your house. Quantity<Quality

Small details can make a big impact. Creative use of ordinary items in ways not normally used can easily impress the judges. Using deco in a transformative manner is more impressive than just simply setting out deco.


Good luck to all who enters! We look forward to seeing your hard work!

*This spellbook sits in the opposite hand as ordinary spellbooks.

Joe's Trailer Park Christmas! Equipped with a Christmas tree too large and a Lion Angel for a tree topper. 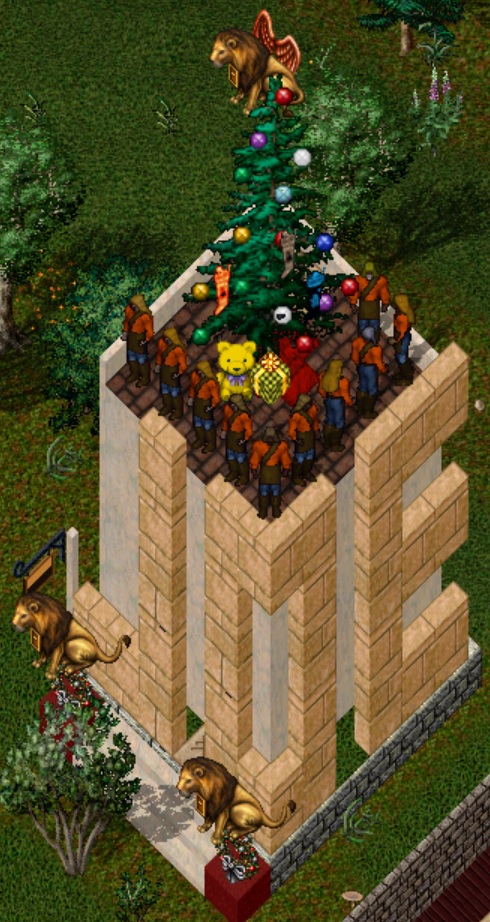 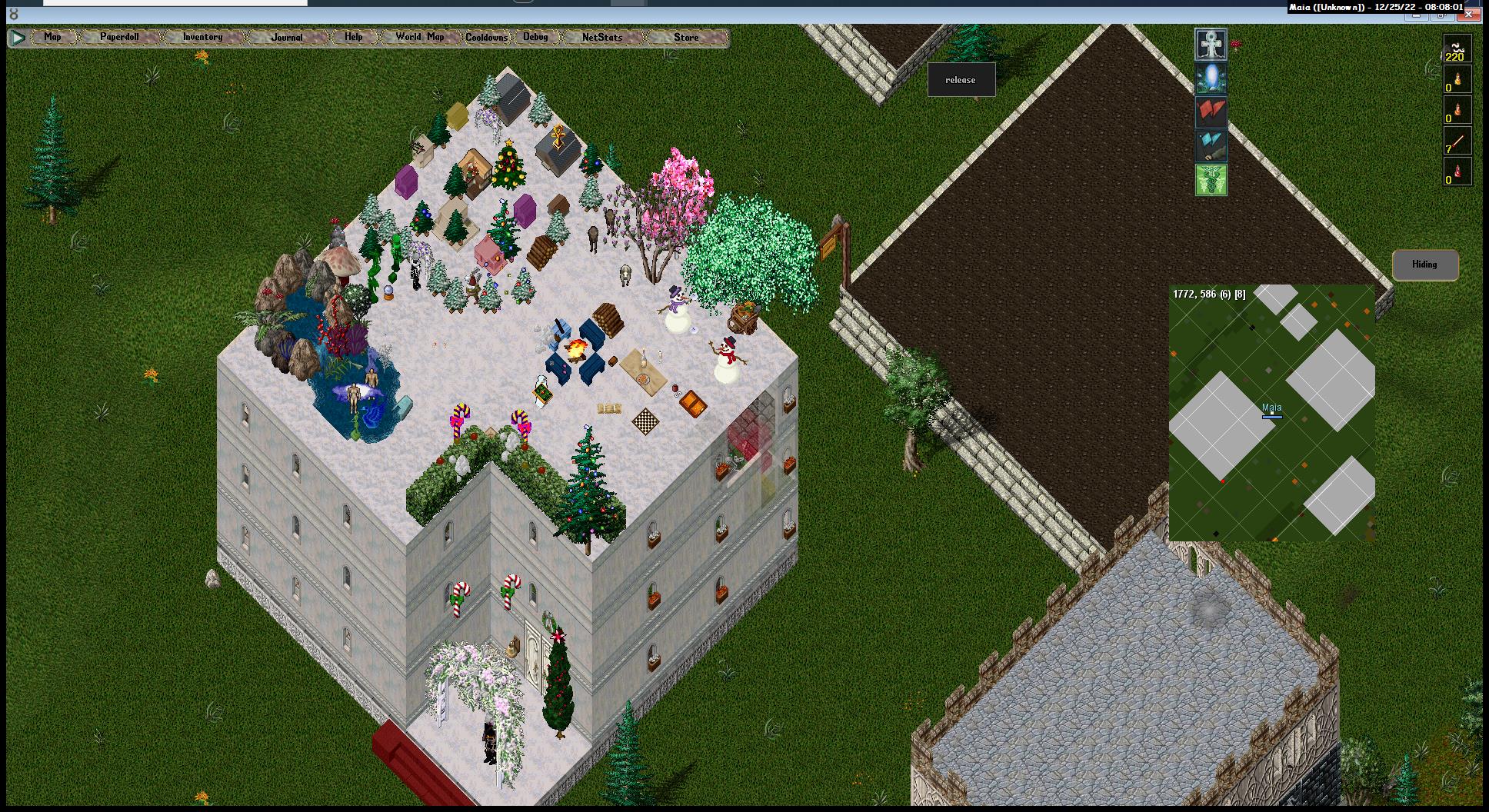 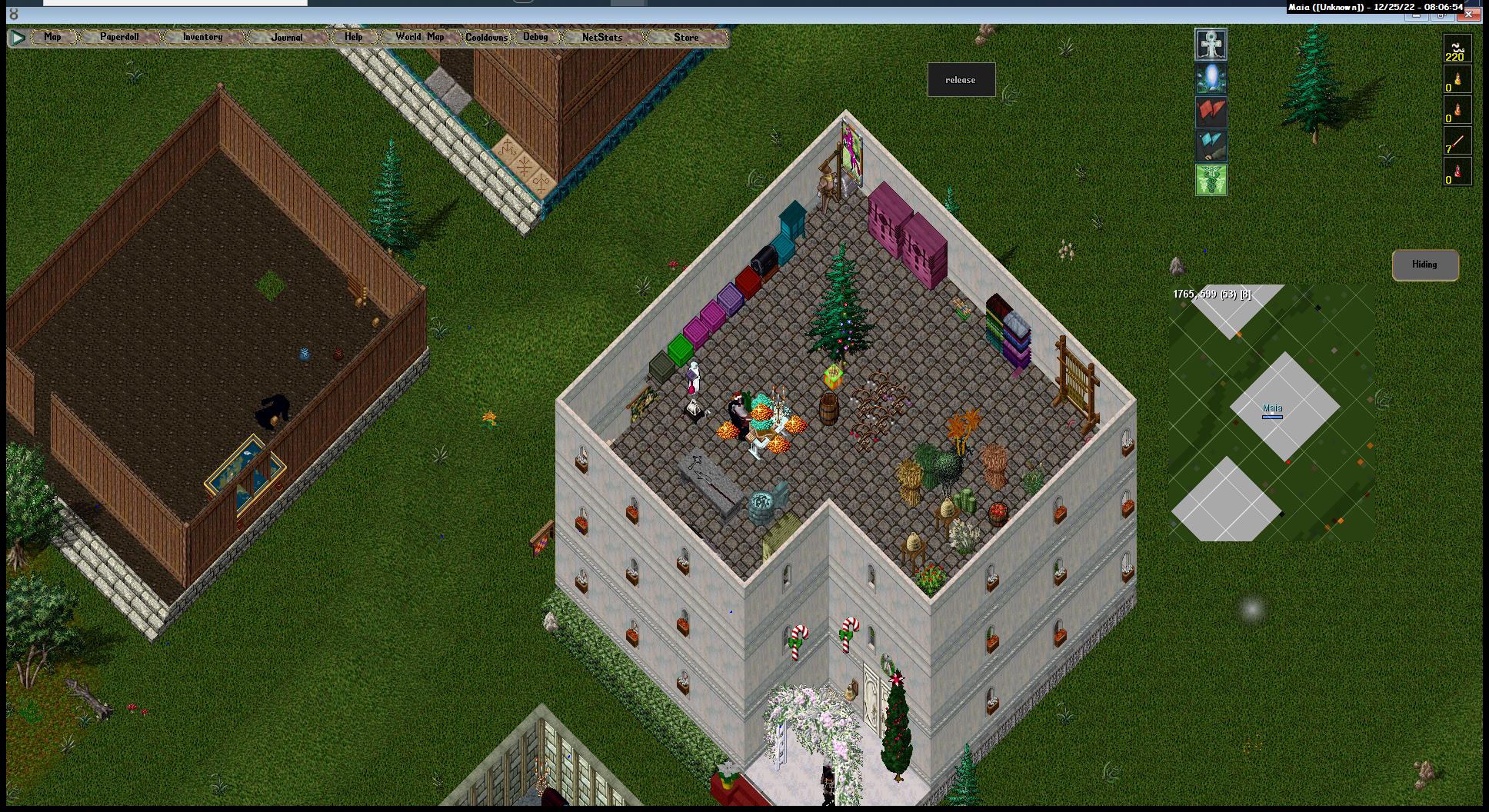 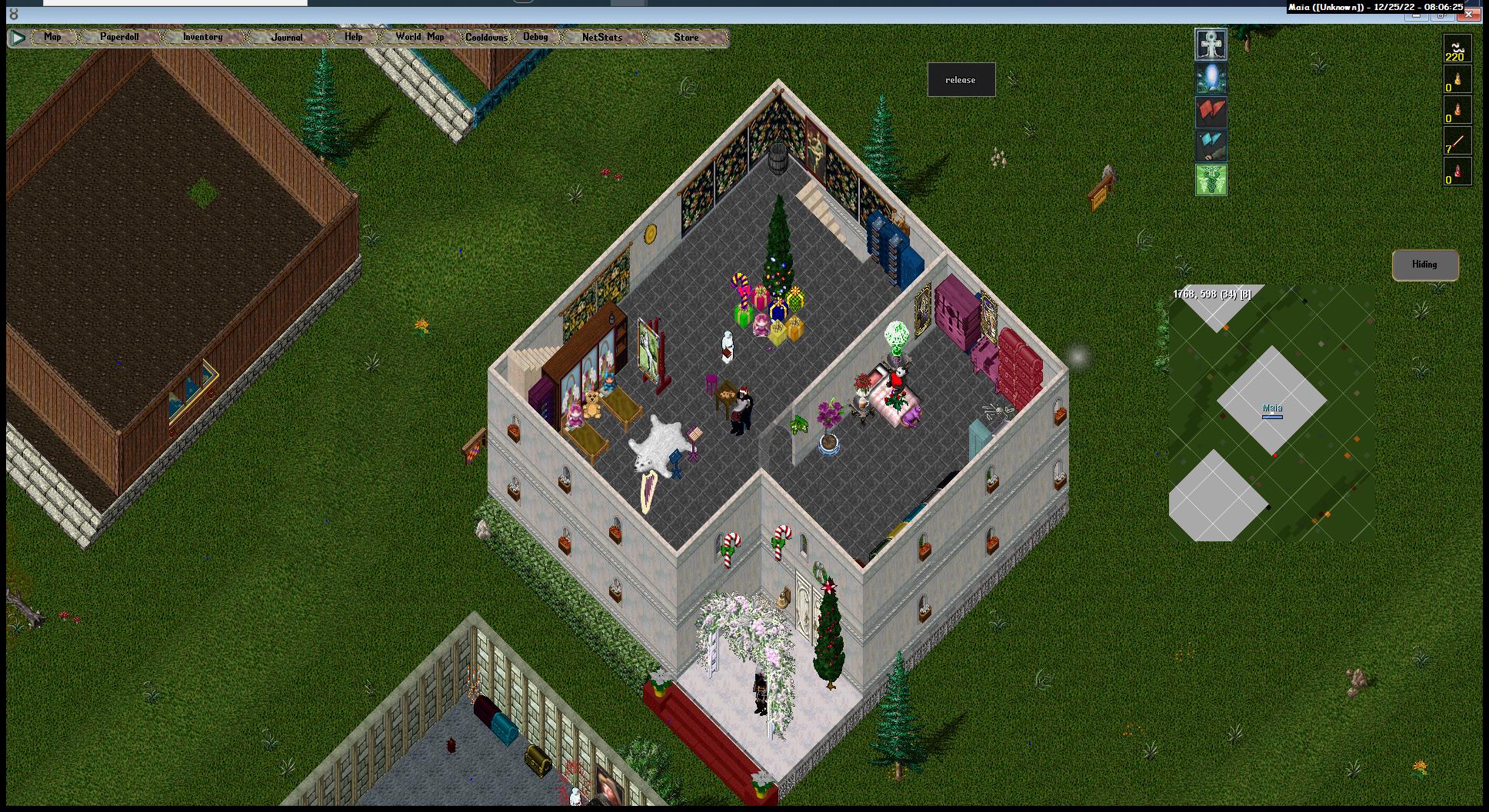 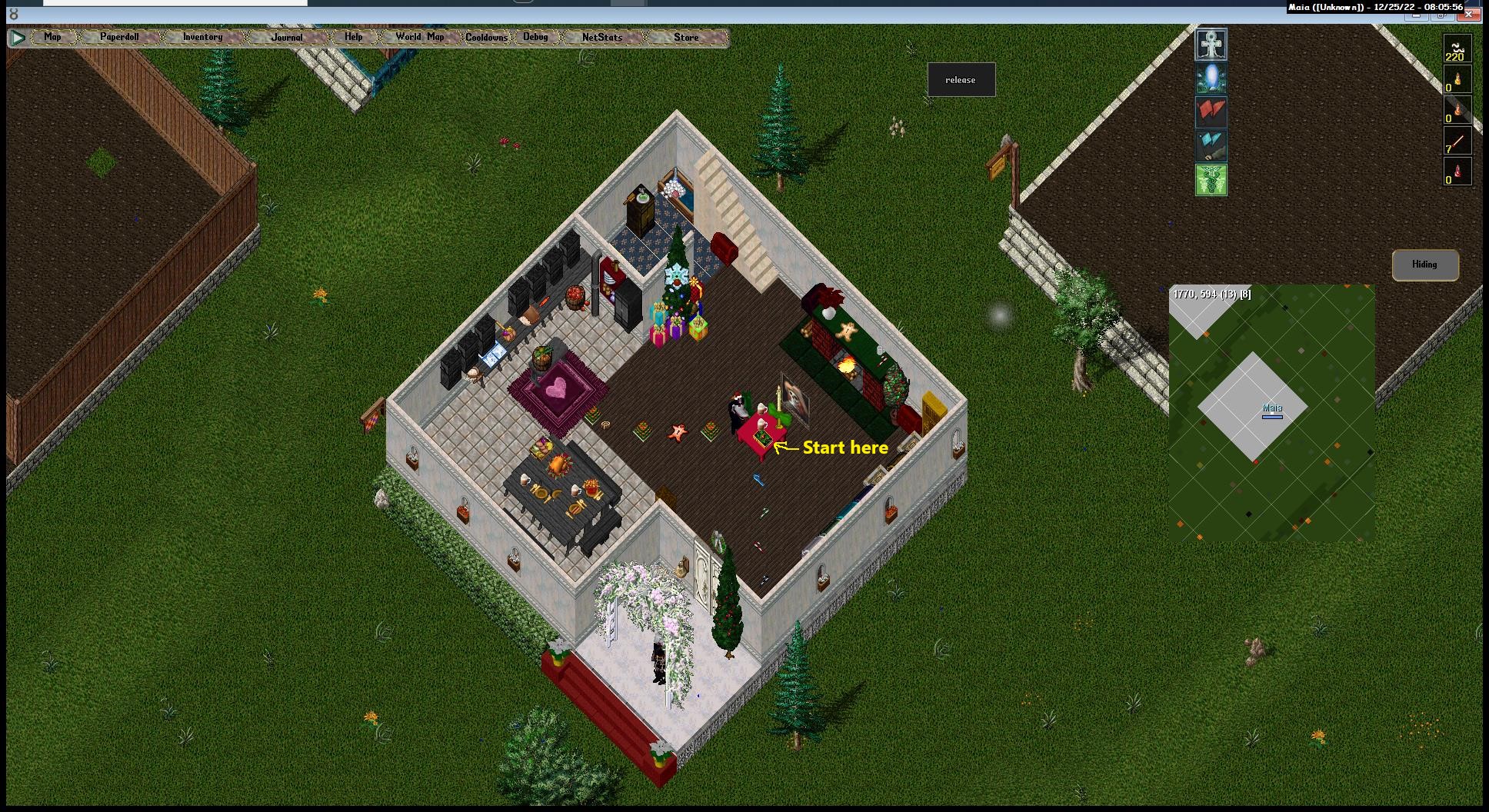 Start your journey by opening up the book!!
F

Situated on the northernmost tip of Dagger island, we are pleased to announce the grand opening of UO:Forever's very first Strip Club--The North 'Pole'!
Now that the Holiday's are over, all of Santa's naughty little helpers can come unwind with a drink and a dance... or something more, if they so desire. Doors are open at 9:00pm nightly! Come and join us.

This next story is inspired by our good friend Weird Al Yankovic.
Santa's workshop is located at 2027, 1109 (just south of the swamp that is north of East Britain) and is open to the public.
It is strongly encouraged you listen to this family friendly classic Christmas carol while you stroll through: 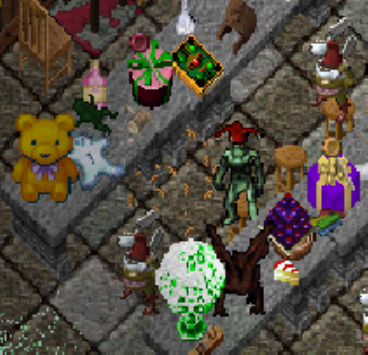 When the boss busted in, nearly scared 'em half to death
Had a rifle in his hands and cheap whiskey on his breath
From his beard to his boots he was covered with ammo
Like a big fat drunk disgruntled Yuletide Rambo 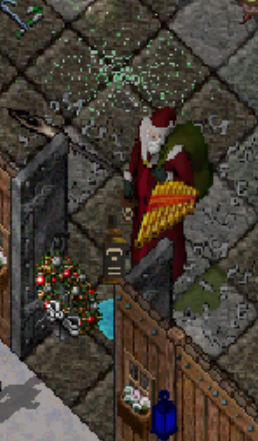 And he smiled as he said with a twinkle in his eye,
"Merry Christmas to all, now you're all gonna die!" 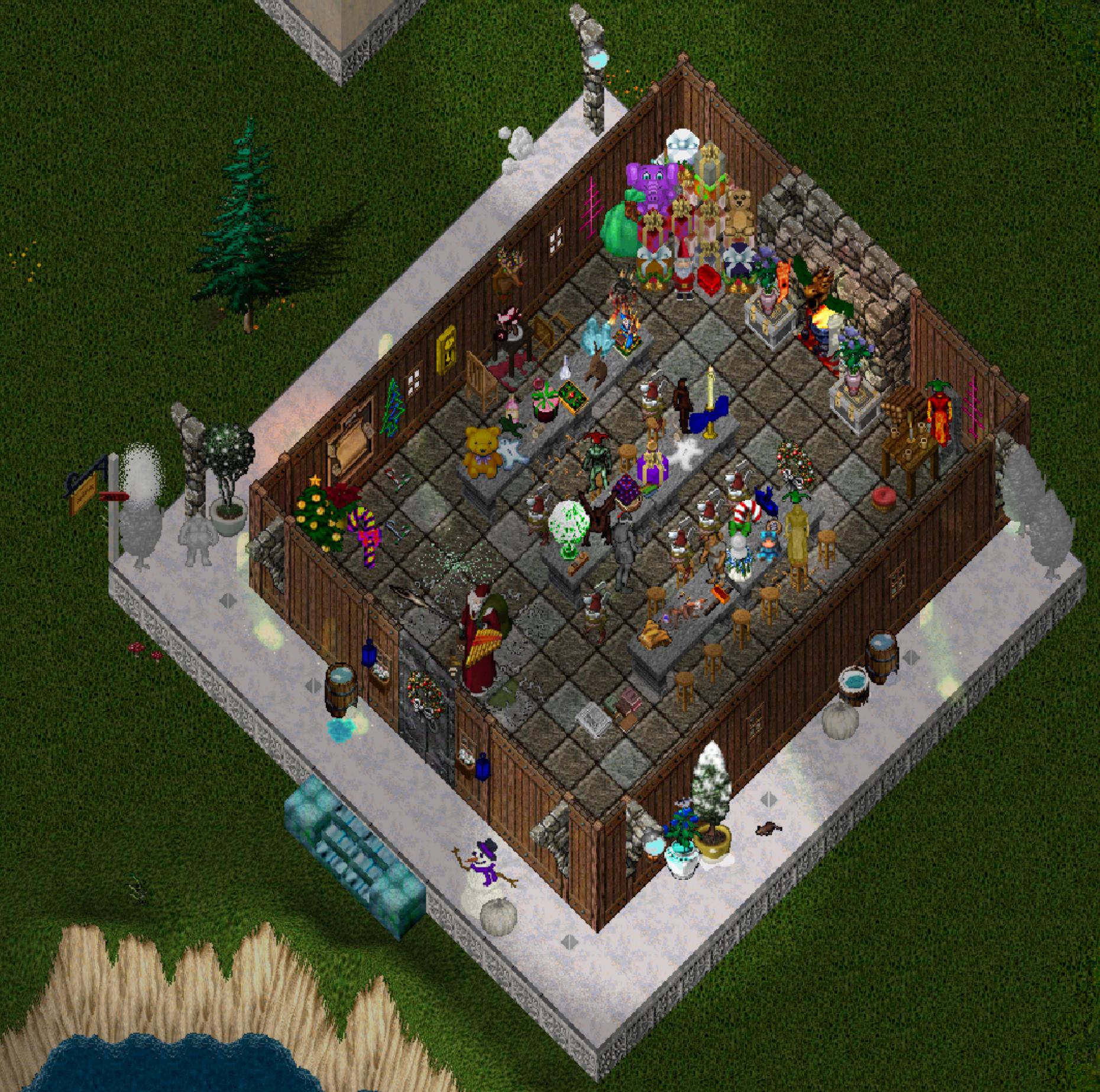 To get up to the next level, step onto the teleporter in the south east corner 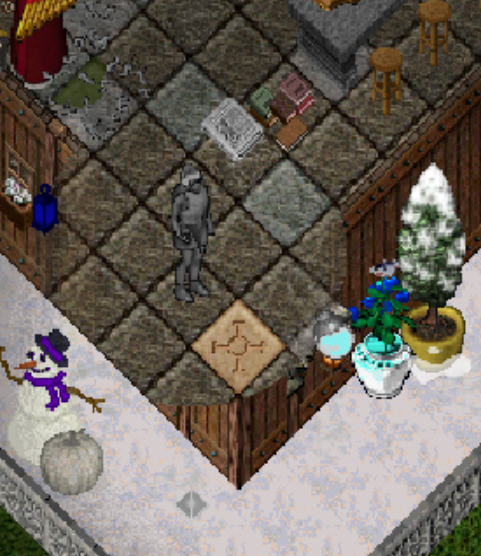 Well, the workshop is gone now, he decided to bomb it 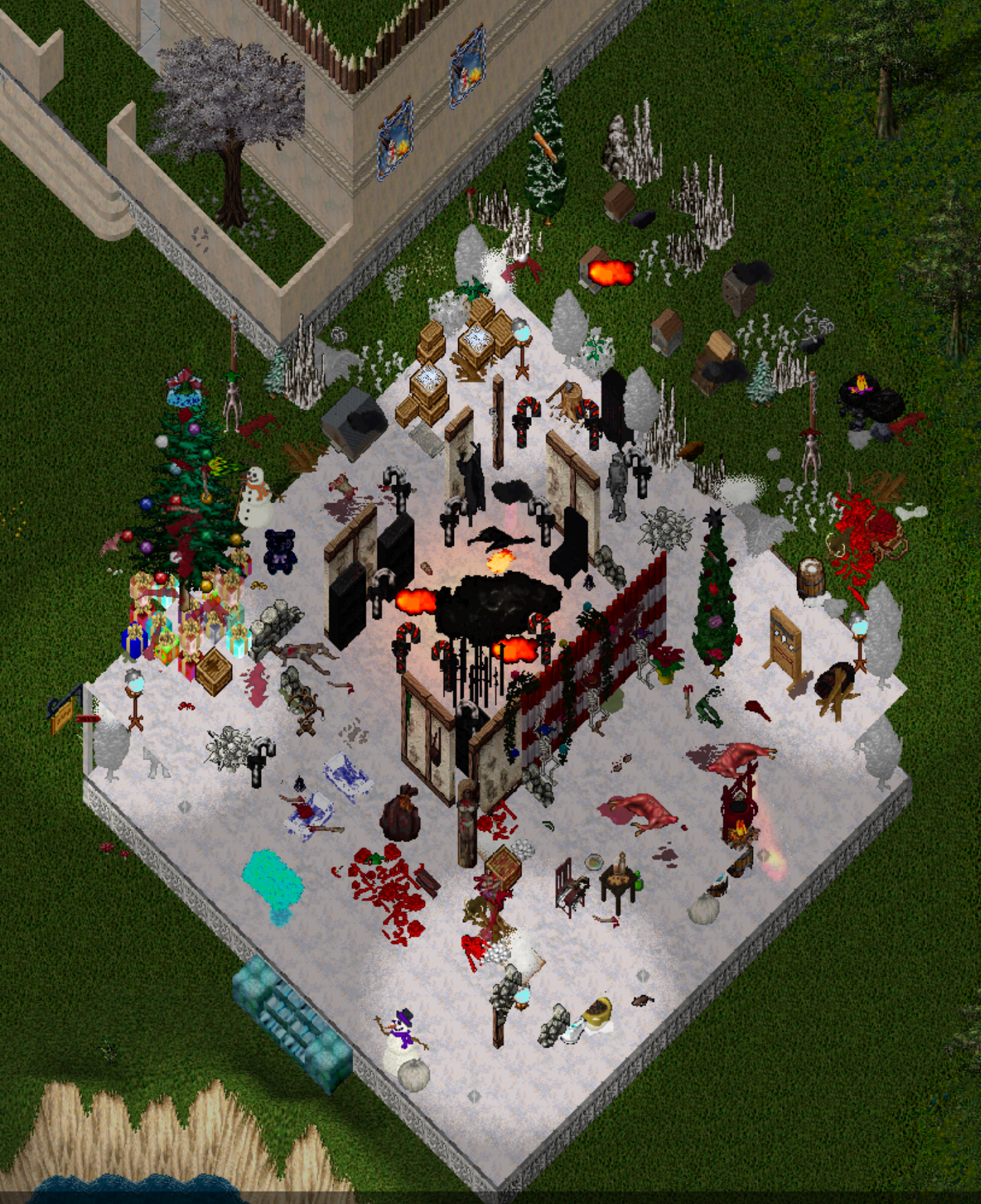 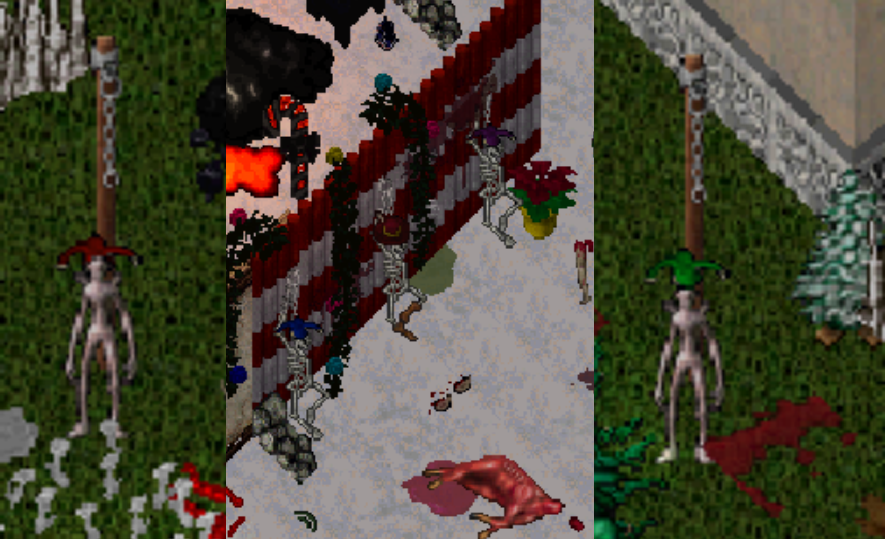 And he ground up poor Rudolph into reindeer sausage 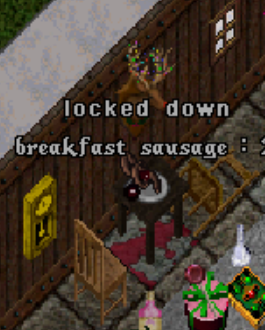 And he picked up a flamethrower and he barbequed Blitzen
And he took a big bite and said, "It tastes just like chicken!" 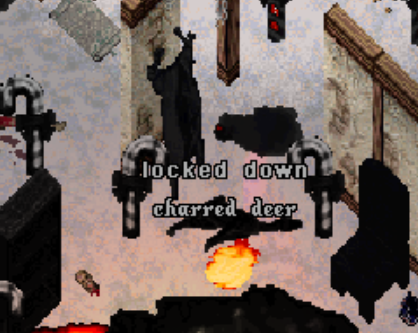 What tree would be complete without a tribute to the artist of the greatest Christmas song by someone who really didn't want to write one. 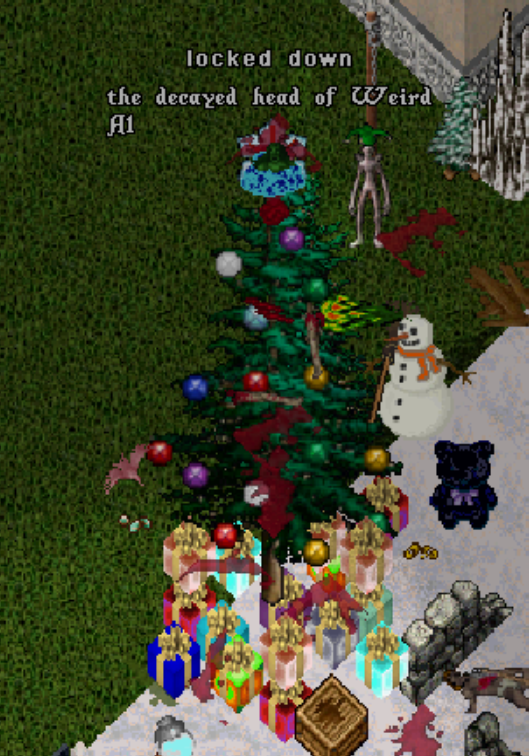 Happy Holidays to all that love them and to those that find them just kinda meh! Enjoy!

Tired of all this Christmas Cheer? Me too! Can't an old man just count his gold coins and point and laugh at everyone else financial misfortune?! I mean I have Caroler's outside my building right now and they're obviously wasting their time on me! All those bright flashing holiday lights are so distracting when I'm trying to get work done in here! If you want to make me some money, direct all inquiry to my clerk out front.... His name is Bob... and while you're at it, leave me alone! Bah, Humbug!! 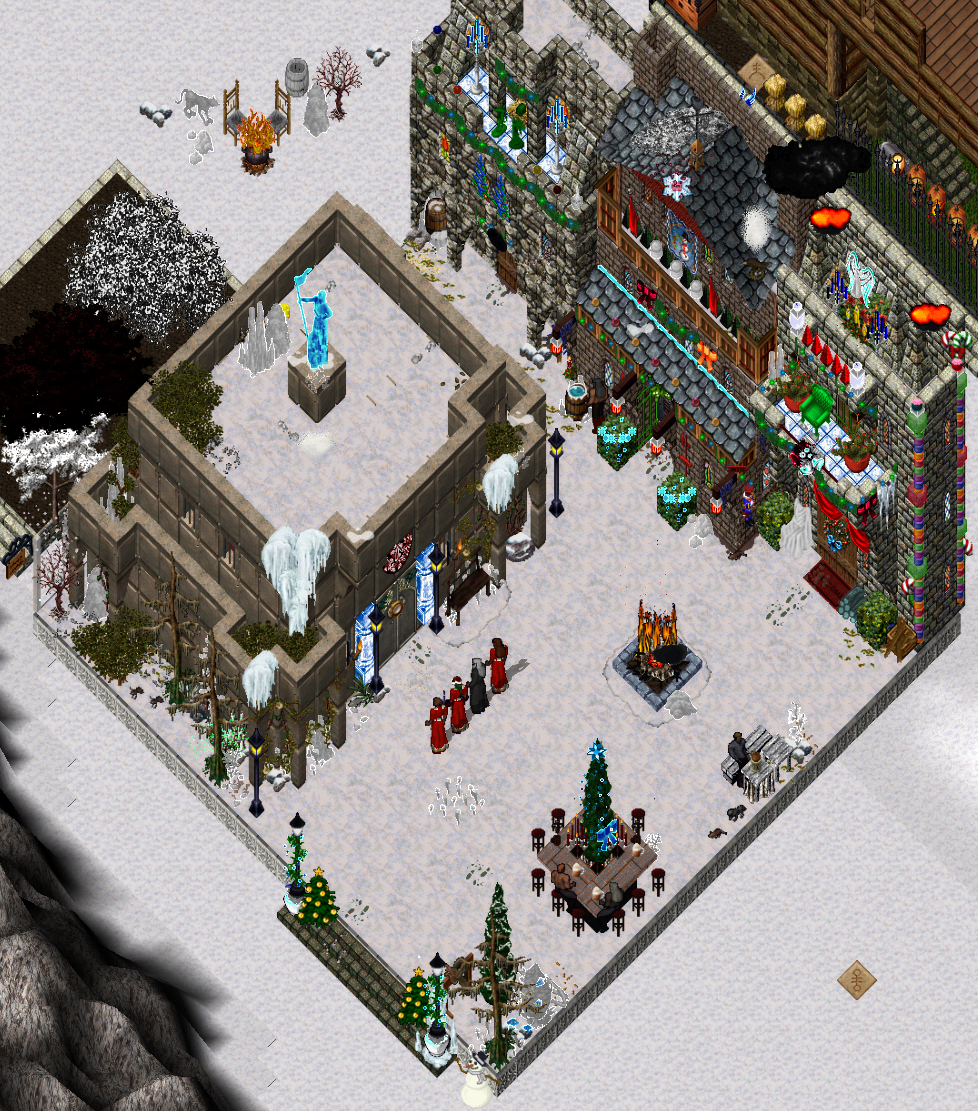 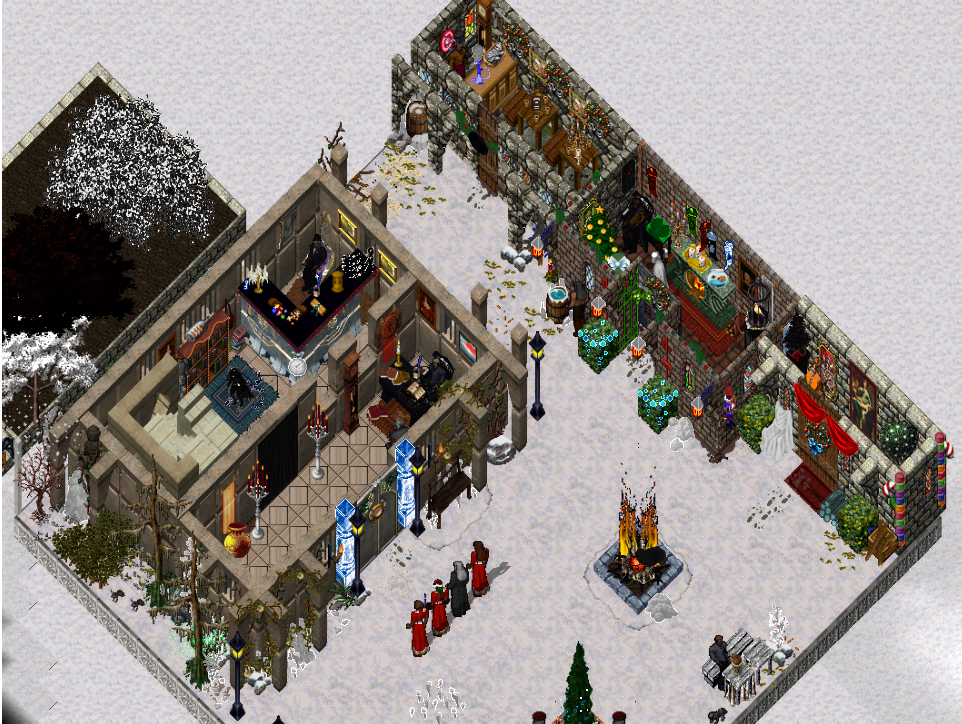 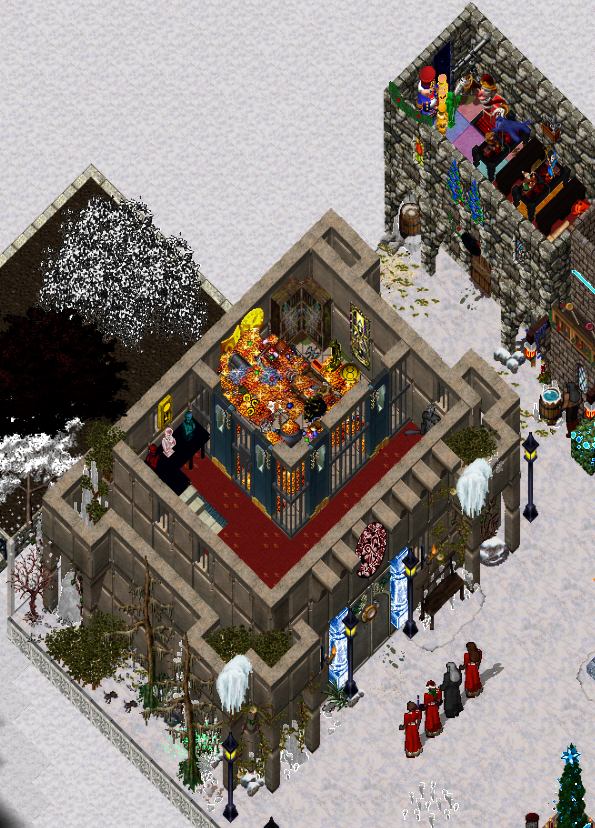 Almost forgot coordinates! You can find my fine establishment at: 4005, 265
C

The Holidays are stressful, after working all year long Santa likes to take a long deserved break at his favorite Oasis Villa Paradise. Hidden in the dangerous Compassion Desert. Santa always pops in through his Polar Portal into his simple penthouse. There is pools, hot tubs, and star gazing at night. A BBQ for a quick snack, or one could visit the plentiful buffets. Santa loves his sweets, among other guity pleasures. All is welcome but... not everyone leaves. For Santa has a secret, his favorite thing to do is, well you will have to see for yourself as you wouldn't believe if I told you. Beware!

Awards have been locked down at each house. Thanks to all who participated!
Hope everyone had a great Christmas!​